The Doctrine of Discovery established a spiritual, political, and legal justification for colonization and seizure of land not inhabited by Christians. Foundational elements of the Doctrine of Discovery can be found in a series of papal bulls, or decrees, beginning in the 1100s, which included sanctions, enforcements, authorizations, expulsions, admonishments, excommunications, denunciations, and expressions of territorial sovereignty for Christian monarchs supported by the Catholic Church. Two papal bulls, in particular, stand out: (1) Pope Nicholas V issued “Romanus Pontifex” in 1455, granting the Portuguese a monopoly of trade with Africa and authorizing the enslavement of local people; (2) Pope Alexander VI issued the Papal Bull “Inter Caetera” in 1493 to justify Christian European explorers’ claims on land and waterways they allegedly discovered, and promote Christian domination and superiority, and has been applied in Africa, Asia, Australia, New Zealand, and the Americas. 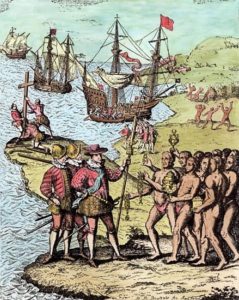 From a stamp engraved on copper by Th. de Bry, 1590: “Discovery of America, 12 May, 1492, Christopher Columbus erects the cross and baptizes the Isle of Guanahani by the Christian Name of St. Salvador.”

Following an inquiry by a subscriber to the UCFORUM we have, with the generous help of Rev Dr John Squires, found this information about the UCA response:

blogs on ‘An Informed Faith’ at https://johntsquires.com/

2 thoughts on “Repudiation of the Doctrine of Discovery”