The religious culture in which Jesus lived was the sacrificial culture centred on the temple in Jerusalem. It provided the background to his thinking and that of most other Jews including Paul, and the idea of sacrifice continued to influence the thinking of the first Christians. Paul spells this out in his first letter to the Corinthians: “For what I received I passed on to you as of first importance that Christ died for our sins according to the Scriptures.” (1 Cor 15:3) 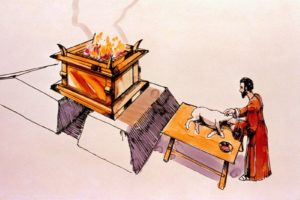 In the “Scriptures” the prophet Isaiah had written that an individual would be an offering for sin and bear the sin of many. (53:10-12). Jesus took on the role of this individual who became known as the Suffering Servant. In the gospels Jesus says that the son of man (meaning himself) must suffer and be killed. (Mark 8:31). He says he came to serve and give his life as a ransom for many. (Mark 10:44) Accordingly Jesus and the first Christians thought of the Christ event in terms of sacrifice.

In the time of Jesus, animals of various kinds were sacrificed in the temple, which must have been more like an abattoir than a place of worship. Today the whole idea of making sacrifices to appease a wrathful god is abhorrent to modern Christians because it is not in keeping with the loving God that they encounter in Jesus Christ. Even the emphasis on sin seems out of keeping with their experience.

Sin is not all the naughty things that we do from time to time. It is everything that separates us from God. Paul said something similar in his letter to the Romans: “Everything that does not come from faith is sin.” (Rom 14:23b) So if sin is removed, we are with God. As Paul said, “Count yourselves dead to sin but alive to God in Christ Jesus.” (Rom 6:11) 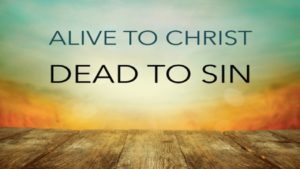 Being alive to God is what is meant by the Kingdom of God. It is not something that happens to good people when they die. By taking on the role of the Suffering Servant Jesus believed that he would bring in the Kingdom of God. According to Isaiah, the Suffering Servant “will justify many”. (Isaiah 53:11b) They will be acceptable to God: they will be with God.

It is important to understand that the sacrificial system was just the background to what needed to be revealed. It was a stepping stone that enabled a further important step to be made. It was the stage on which a drama of revelation could be performed.

In the Kingdom of God everyone is loved by God. With this love there is acceptance, forgiveness, and healing. The key idea is ‘love’ (Greek: agape), which in the New Testament means a self-giving concern for others. Jesus does more than talk about the Kingdom of God: he demonstrates what it is like by caring for others, and he does this in a self-giving way. Actually, he gives himself completely: as Isaiah says, “He poured out his life unto death.” (Isaiah 53:12)

As modern Christians we do not have to sacrifice animals or anything. We can abhor the old system because it is irrelevant today. What is essential is that we follow Jesus’s example and behave in a way that overcomes selfishness. We must not be self-centred but open to the world, and love as Jesus loved. The key idea in Buddhism is overcoming self, and this is also what Christianity is about. The Buddha was not interested in gods, but Jesus used the prevailing Jewish system to reveal the loving God that he believed in and which Christians believe was with him and in him.

5 thoughts on “Jesus and the Sacrificial System”