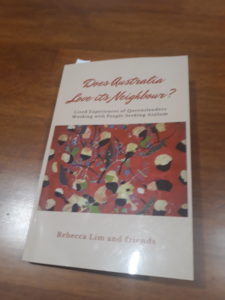 Article 14 (1) of United Nations Declaration of Human Rights adopted in 1947 provides a guarantee to the “right to seek and be granted asylum in a foreign territory”. But the declaration leaves it up to each country to constitute its own definitions of ‘asylum seeker’, or ‘refugee’ and construct its own policies on treatment.

Rebecca Lim is a Brisbane-based immigration and community engagement practitioner who co-founded the Brisbane On Arrival Refugee and Asylum Seeker Response Group. Together with Dr Brigid Limerick, former Associate Professor of Education at QUT, Dr Fotina Hardy a qualified social worker, and 17 other writers have produced a very timely publication. A significant number of refugee related organisations related to the work of Rebecca and her team, often themselves becoming better informed by the relationship. The result is a collection of first-hand, experiential accounts of episodes in one of the most important contemporary issues challenging the world. Clearly, Australia has not demonstrated that it adheres to international humanitarian and refugee laws.

One doesn’t read a book like this for entertainment or relaxation. It provokes and stimulates and draws out the emotions because of the hard truths it presents. From the highs of the huge public response in demonstrations and voice to the lows of ever harsher government retaliation, this material will challenge readers to evaluate their own position on refugees.

So many of these stories have never before reached the public – so much of the cruel depth of treatment has remained hidden. So much of the immense cost has been buried. They are stories of an Australian government that had increasingly made ‘detentions’ more unbearable while distancing itself from the lives they were crushing.

Nevertheless, the book offers hope and solutions that would change the context and mindset towards integrity and humanity. It is an acknowledgement and exposure of the issues as well as a recognition of the volunteers while being a plea for compassion and justice. It is also an appeal to Australian governments to get back on track with the historical commitments to refugees established by Menzies and championed internationally by successive Labor governments.

The work goes on through many faith-based and other groups and individuals including the Indooroopilly Uniting Church Refugee and Asylum Seeker Hub, the St Vincent de Paul Queensland Social Justice Committee and others acknowledged in the book.

Available from:  Gregory D’Arcy for $25 (Concession $20) plus postage. Any money from this book will be returned to the refugee community.

1 thought on “Book Review: Does Australia Love its Neighbours?”