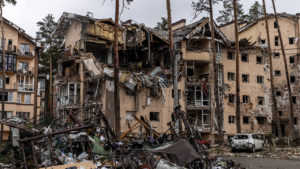 IRPIN, UKRAINE – MARCH 03: Destroyed buildings are seen on March 03, 2022 in Irpin, Ukraine. Russia continues assault on Ukraine’s major cities, including the capital Kyiv, a week after launching a large-scale invasion of the country. (Photo by Chris McGrath/Getty Images)

If you missed Stan Grant’s recent Wilkes Oration—25 February in Adelaide, organized by the Effective Living Centre—I recommend you catch up on the video recording (go to https://effectiveliving.ucasa.org.au/). Stan presented a profound diagnosis of the geo-political woes of the world at the present moment—how the divisiveness of identity politics weakens the liberal democratic West, setting us up as easy prey for the tyrannies of the world, principally Russia and China.

Obviously, there are two parts to Stan’s thesis: his view on identity on one hand, and his view on the age-old confrontation between freedom and tyranny on the other. Let’s see if we can make sense of these two very urgent issues by applying to them that greatest of all hermeneutic lenses, namely the wonderful (though enigmatic) notion of the Kingdom. What we’re looking for is some hope, at a time when things seem to be all gloom and doom—Stan’s address on Friday night, for all its heartfelt eloquence, didn’t leave us with the impression that things could get anything but worse—and where better to look for hope than to the Kingdom? 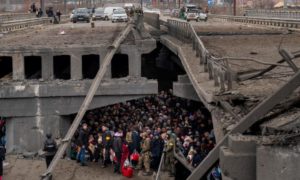 Identity firstly. There’s something essentially misleading in the notion of identity, because initially you think it’s primarily about the individual, when it’s actually always about the group. Identity is really the process of isolated individuals finding the solidarity of a group to identify with. Usually, the driver is fear or oppression of some sort—people band together under the banner of some common trait or experience—family, tribe, race, religion, trauma, economic status, gender, sexuality, etc.—in order to throw off the fear or oppression that besets them. So, identity can be tremendously positive, a powerful force for human liberation. There’s no doubt also that this goes right to heart of the idea of the Kingdom—but let’s circle back to that a bit later, after we’ve done some more digging around.

Identity can also, as Stan so passionately declaims, be very divisive. This is really referring to a later phase of the process—what happens when you stop at any limited human identity and allow it to become fixed, permanent, exclusive. Identity is a great tool for liberation, but once you achieve liberation, you’d better drop it immediately like a hot potato before it becomes a tool for the very opposite – oppression. Yes, identity is a tool of oppressors as well as oppressees—you can wield it yourself on a small scale (it’s called racism, sexism, discrimination, exclusion, trolling, etc.), or you can let some tyrant or demagogue manipulate you into wielding it on a larger scale.

Which brings me to Vladimir Putin. Vlad is the arch-manipulator of other people’s identity. As to his own motivation/identity, the Russian patriot mantra, the travesty of the collapse of the Soviet “empire” narrative, even the devout Russian Orthodox believer act, are all just a front—don’t be deceived by it as a large proportion of the Russian population are. He’s really just an old-school tyrant, not “evil” or “insane” (whatever such words actually mean), just a seriously bad person in the Ivan the Terrible or Josef Stalin mould. Psychopathic? —probably. He’ll stop at nothing—manipulation, lies, murder, laying waste a whole country—to get what he wants – power, control, riches, the adulation of his people, the rest of the world fearing him. He wants to be loved, in other words, just like the rest of us; he just has a seriously distorted idea of how to get it.

So, identity can be anti-Kingdom as well as pro-Kingdom—a tool for oppression as well as liberation – this is really what Stan was getting at. Don’t stop, therefore, at any limited human identity—this is nothing less than an injunction of the Gospel itself – the call to unlimited, universally inclusive human solidarity. It’s also central to the idea of democracy and, dare I say it, to the Kingdom. Don’t be black or white, male or female, gay or straight, Indigenous or European, Ukrainian or Russian, etc.—just be a human. In fact, don’t even be a human, because that excludes the plants and animals—be a living soul (that’s my recommendation of what to identify as, at any rate).

Now to freedom versus tyranny. Is history just a cycling back and forth, freedom winning one minute, tyranny resurgent the next? Or is there something profound going on—at a deep, deep level, so that it’s sometimes not visible—in which gradually, inexorably, freedom is growing, overcoming, advancing, like a mustard seed as the parable says? Freedom aka the Kingdom. That’s the $64,000 question.

It’s certainly hard to see any hope right now, with Russian tanks rolling into Ukraine, and Xi Jin Ping threatening Taiwan. Except that—and here’s some Kingdom hermeneutics—tyranny always sows the seeds of its own destruction. In fact tyranny is, always, a sort of Ponzi scheme (think Bernie Madoff, New York financier c. 2008, died in jail last year), drawing ever more deeply on a diminishing resource—your ability to marshal other people’s hatred in your favour—it’s a one way ticket to downfall (German, “der Untergang”)—sooner or later it comes back to (excuse my Esperanto) bite you on the bum. We might almost feel sorry for poor old Vlad, except for all the carnage and horror he’ll cause in innocent people’s lives before he finally brings the temple down on himself.

I reckon Xi will be absolutely dismayed by Putin’s absurd over-reach, his massive over-playing of his hand—he even threatened to go nuclear on Monday. Xi just wants back what’s never stopped being a part of China, namely Taiwan—and Taiwan itself has never stopped wanting to be part of China—the dispute is over who gets to govern the reunified country. Putin’s crazy actions, which will inevitably fail and bring about his own certain downfall, will only make it harder for Xi to get his hands on Taiwan.

What we’re seeing right now is the unity of the West lining up against the Russian regime, with massive aid, military and otherwise, being sent to Ukraine, and financial and other sanctions strangling the Russian economy. At the same time opposition to Putin is growing rapidly within Russia—any day now law and order might collapse, there could be a military coup, Putin could be removed, or worse. In the end, it will be his own people who will bring him down—God bless them when they do, finally freeing themselves from the tyranny of the Tsars, the Commissars, and the Oligarchs. What the tyrant never counts on is the spiritual development of other people because they are incapable of it themselves!

You know, and back to the description of tyranny as a Ponzi scheme, how could anyone be sure that people’s hatred is always a “diminishing resource” (you might say a “non-renewable resource”)? Well, it’s really a statement of Christian faith, of the Gospel in fact—that love will always overcome hate—that the power of love is always stronger than the power of hate. So, you might say that love, by contrast to hate, is a renewable resource—not diminishing but increasing. And love = freedom, so we circle back once again to the idea of the Kingdom. 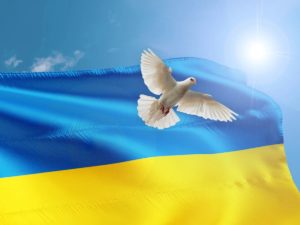 Anyway, you wouldn’t want to try to predict the future, but my best guess (my Kingdom-inspired guess) is that Putin is on the way out, and that the world will be a better place for it afterwards; but in the meantime, who knows what suffering we’ll have to endure. We’re in solidarity, therefore, with the people of Ukraine and, for that matter, the people of Russia—in a world which often seems beset with chaos and danger, but in which freedom is most certainly lurking just around every corner. Your Kingdom come. Amen.