A Time of Enchantment

Archaeological research confirms the accuracy of the New Testament as it restores meaning to our lives. 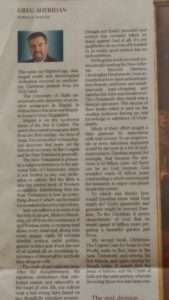 (Sorry that the article does not copy well to this blog)

Full scanned copy can be sent to those who request it.

Response to Questions on Sheridan Article

Where do you stand on ‘mistaken propositions’?

First, he has quite a mouthful on Christianity as the universal faith unlimited by culture. As a Christian believer I’m not sure I can go with him that far!

God is dead. I clearly recall the controversy Robinson’s book caused at the time of its publication, but I don’t know if I ever read it. But I’m pretty sure that Sheridan has got his idea entirely wrong. I believe he meant that the God portrayed by fundamentalism is dead, and must be replaced by a totally new understanding (like J B Phillip’s your God is too small). That is one of the great things that modern scholarship has given us.

The Bible is full of lies. Some ‘way out’ liberals may have promoted this, but for the mainstream of genuine Christian liberals, this is sheer nonsense. I think of a person like Fosdick to whom such a criticism could never be levelled. With my own high regard for the ‘good book’, the phrase, historical reality, is a bit much to claim for written records from an age when our modern understanding of history was in its infancy.

Here again we have a great flow of rhetoric which doesn’t do much other than polarise the discussions.

Personally, I can’t claim to have read Dawkins, Hitchins, etc. widely and maybe they are addressing  a  ‘farcical caricature’ rather than Christianity itself. Whether or not they put in a lot of irrelevant science to buttress their argument, again, I don’t know. But at least they have a right to be heard and debated seriously, or else we are all losers. Certainly, I can agree with Sheridan that 14 milliion years is a very little time scale in God’s dimensions. (I think Thelma mentioned we have God is Good for You).

Is it true that the Jesus of History and the Christ of faith are the same?

We also have Sheridan’s book mentioned.

My response to this question would be that I think our Greg should read Richard Rohr’s The Universal Christ (a Franciscan from his own tradition). He sees Jesus as One, indeed a very unique One, of the many Christs or means by which God reveals himself to us. [I know that’s a poor expression of Rohr’s ideas] but it’s something I am still struggling to come to terms with. If we fully identify the man Jesus with the Christ, we do a great injustice to the incarnation. We either end up with a God who masquerades as a human, or a human who has been somehow exalted to the heavenly places. That would make nonsense of Jesus’ words, God is Spirit, and those who worship him must worship in spirit and truth.

This is a strong criticism of progressive Christianity.

I find his “flickering half-life within Christianity” a sad summation of the legacy of Spong, who has personally been such a blessing and inspiration to me. If Greg departs this life with a mantra for Christian living anything like Spong’s “live fully, love wastefully & be all you can possibly be”, then I will eat my words. Films and books like The Da Vinci Code pale by comparison with the legacy of such men and women who have been leaders in Progressive thought. My prediction is that their work will outlive much of today’s hard -line fundamentalism. If not, then God help us all!

Do you think people today have been ‘indoctrinated from birth etc? ‘

In a word, NO! It’s much more likely that they have felt that the kind of Christianity that the Church generally has preached in modern times is so out of touch and irrelevant, that they have simply walked away from the Church. The number of fierce anti-Christian parents debarring their children from any Christian teaching would be small in comparison with the indifferent ones and those of other faiths.

As regards the work of modern Biblical scholarship which he blames for the demise of faith, I want to say that I recently ‘waded through’ a book by John Dominique Crossan called The Birth of Christianity, in which he seeks to explore the silent years between the first Easter and the writing of the Gospels. Apart from his many insights into the world of Jesus’ time, I gained a profound appreciation of the meticulous way in which Biblical scholars go about their research, which I would put on a par with most sciences.

I really think Greg might be the one needing to exercise a certain becoming modesty before he rubbishes their work so lightly.

Do you agree…..the discovery of ancient Jewish synagogues…?

I think that like most researchers in every other discipline, Biblical scholars would be ready and willing to amend their ideas as they surely have had to do with the discovery of manuscripts and other ancient relics. The Jewishness of Jesus has been recognised by most of the Biblical scholars I have read recently, as well as the understanding that has grown that a large number of Jewish Christians participated in synagogue worship regularly, and that the pattern of the Gospel narratives was aligned to the Jewish year and its festivals.