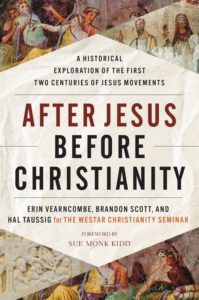 From the creative minds of the scholarly group behind the groundbreaking Jesus Seminar comes this provocative and eye-opening look at the roots of Christianity that offers a thoughtful reconsideration of the first two centuries of the Jesus movement, transforming our understanding of the religion and its early dissemination.

Synthesizing the Westar Institute’s most recent scholarship—bringing together the many archaeological and textual discoveries over the last twenty years—they have found:

Exciting and revolutionary, After Jesus Before Christianity provides fresh insights into the real history behind how the Jesus movement became Christianity.

Bp Jeremy Greaves has arranged an Eventbrite link…. A conversation with Prof Brandon Scott and Dr Greg Jenks on the new important Westar Institute book, You are invited to link in (see below for date and details) to this January event.

Here’s the link to the zoom conversation with Brandon and Greg. Jeremy will be the host and facilitator.

Enquiries can be directed to Jeremy.

3 thoughts on “A conversation with Prof Brandon Scott and Dr Greg Jenks on the new important Westar Institute book, After Jesus Before Christianity.”