The first is an article titled ‘Fewer Americans than ever are Christian as more say they have no religion’ by Mike Stunson,15 December 2021, which appeared in Flipboard 10 today, it is based on a poll by the Pew Research Centre.

Key conclusions of the Poll are that:

– 30% of the American population see themselves as atheist, agnostic or nothing, nearly double from 16% in 2007.

– For the first time, fewer than 50% of adult Americans belong to a house of worship.

Ryan Burge, a political scientist at Eastern Illinois University and a Baptist minister, is quoted as saying “Church attendance is the first thing that goes, then belonging, and finally belief – in that order, Belief goes last”. (I’ll come back to this).

(On the American situation, I think the noted trends tie in with other evidence that there is growing interest in progressive theologies, among younger generations in particular.) 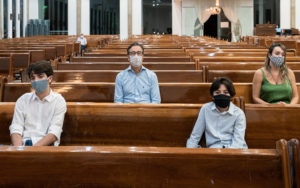 The second comes from Australia, the most recent National Church Life Survey (NCLS) results from their November 2021 Australian Community Survey (ACS). Australia has always been seen as a less ‘religious’ society than America, and Australians generally consider themselves to be more spiritual than religious – around half say they are both, but of these just half again are practicing.

Some key conclusions from the Australian ACS survey are:

– 30% of Australians might attend a Christian church service if invited, if the invitee is a close friend

– The cruncher coming into Christmas is that around 51% of adult Australians do not see Jesus as a living historical figure (23% see Jesus as a mythical or fictional creation, and 29 % simply do not know). The survey suggests younger people are more likely to hold this view.

– 16% of Australians are willing to use on-line platforms to discuss matters of religion and faith.

Reflecting on these findings

One has to ask why 51% of Australians do not see Jesus as having been a living person? It’s not because they have been reading the theories of authors like Volney, Dupois, or Bauer or more recently Doherty or Price. Neither because of a conscious choice to reject evidence in wide sources of non-canonical texts, apologists Clement, Ignatius and Justyn Martyr, or factual accounts of prolific historian Josephus, Seutonius or Pliny the Younger, independent sources who freely acknowledged Jesus as a living historical figure. Yet the survey results are not surprising, as the church has cloaked Jesus with an aura of classical mythology and supernatural elements, culminating in divine titles, that makes it difficult for many to understand Jesus as someone truly human who gave to the world a unifying social gospel message. In its preoccupation with symbol, the church at large faces a crisis of language and representation. Images and symbols that engaged early century minds have little place in the imagination of a majority of people today, whose worldview is shaped by contemporary rational knowledge and understanding. The church must ask itself, has the humanity of Jesus been lost? The evidence is in the data of polls conducted by NCLS and others.

So, attendance is first to go, then belonging, then belief, and finally ground of reality!

1 thought on “TRENDS IN RELIGION”