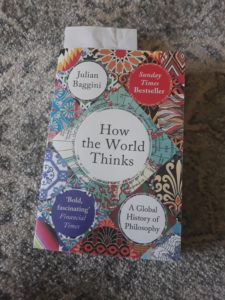 Apparently a better understanding of ourselves comes from having knowledge of how others think. For Baggini’s tour de force of the world’s philosophies and cultures, as they have evolved, there is much value in a willingness to listen and learn. He critiques philosophies and philosophers and for those of us in the West there are many lessons we have not learnt because of our pre-occupation with our own tradition to the exclusion of all others.

Reading this book I was reminded of the time when I surveyed 50 people on the question – Who or what is God? I received 50 different answers ranging from a physical person somewhere in the universe to a notion of love. All the answers could have been defended with biblical evidence. Our understandings, insights and points of view are hugely influenced by the context and the ‘influencers’ from which we gain knowledge. For the Western world, philosophy has distanced itself from the insights that the Indian philosophical gurus utilize. Baggini is quite critical of this failing in Western philosophy. He claims insight without analysis and critique is “just intuition taken on faith”. Analysis without insight is “empty intellectual game-playing”. His key argument is that we would profit by “sympathetically but critically engaging with both”.

One of the key debates has been whether religions (theologies) are philosophies. His thoughts on this make great reading for progressives.

Similarly the author presents a case for the overemphasis on logic in Western philosophy. He assumes that reason and logic are synonymous. We should therefore focus more on reason and rationality in our philosophizing.

This is a grand journey from Greece and earlier through Eastern to Western philosophies, secular reason, and enlightenment, truth seeking, metaphysical and rational thought  and on to modern philosophy now impacted by global influences. It is a journey I would recommend to any thinking person.

1 thought on “Book Review: How the World Thinks”