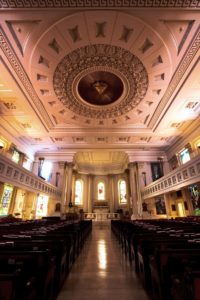 “There can be nothing outside that love and nothing the love cannot overcome. Our witness therefore is radically inclusive, as God is inclusive; radically merciful, as God is merciful; and radically generous, as God is generous. It is the good news.

“Our clarity that it is important to leave stereotypes at the door, our openness to God and to God’s love, our acceptance of those with lifestyles, values, or personalities different from our own, are all gifts of the Spirit and come from God. We share resources of faith, hope, and discernment and recognize enormous potential in our location, our facilities and the blessing of people from every generation and lifestyle.”

The Rev. Dr. Charles “Charlie” Dupree joined St Paul’s in 2019, coming all the way from Speed, North Carolina by way of Bloomington, Indiana. He and his husband, Matthew, 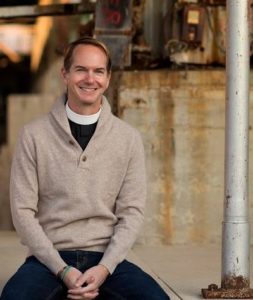 reside in Richmond along with their cat, Francis. Charlie is an artist, graphic designer, composer, writer, and musician. He is an ardent believer in extending

the warmth and radical welcome of Jesus in all that we do as a church, and that we should never stop wondering and asking questions about our faith.

An exceptionally gifted priest, an experienced and effective leader, and a compelling and thoughtful preacher, he has been the rector of Trinity Episcopal Church in Bloomington, Indiana, for the past 11 years.

The funeral service will be live-streamed on the St. Paul’s website HERE and on their Facebook page HERE. You can also find a direct link to the live stream feed on YouTube HERE. The service commences at 2pm Virginia time (30th September) ie. 4am Brisbane time (1st October).

One of America’s best-known spokespersons for an open, scholarly and inclusive Christianity, the Rt. Rev. John Shelby Spong, died Sunday, September 12, 2021, at his home in Richmond, VA. He was 90 years old.
Bishop Spong was ordained to the priesthood in 1955 and served for 20 years as a priest in Episcopal churches in North Carolina (St. Joseph’s, Durham, and Calvary Parish, Tarboro) and in Virginia (St. John’s, Lynchburg and St. Paul’s, Richmond). In 1976 he was elected VIII Bishop of Newark where he served for 24 years.
A deeply committed Christian, he insisted that he must also speak as an informed citizen of the 21st century. He studied at major centers of Christian scholarship including Union Theological Seminary in New York, Yale Divinity School, Harvard Divinity School and the universities of Cambridge, Oxford and Edinburgh. He was named the Quatercentenary Scholar at Cambridge University (Emmanuel College) in 1992 and the William Belden Noble Lecturer at Harvard University in 2000. He taught at the Graduate Theological Union, Berkeley, CA; Drew University, Madison, NJ; Harvard Divinity School, Cambridge, MA; The Pacific School of Religion Berkeley, CA; the University of the Pacific, Stockton, CA; and at Trinity College at the University of Toronto.
Bishop Spong was one of Desmond Tutu’s co-consecrators in 1976. He ordained to the priesthood the first English woman, the Rev. Dr. Elizabeth Canham, long before the Church of England was willing to ordain women. On December 16, 1989, he ordained to the priesthood the first openly gay man, living in a publicly acknowledged committed relationship. That ordination led to the church’s willingness to bless committed gay unions.
While serving at St. Paul’s Church in Richmond, VA, Spong, together with Rabbi Jack Daniel Spiro and the University of Richmond’s Department of Religion Chair, Dr. Frank Eakin, led a citywide Jewish-Christian dialogue.
Well-known in radio and television circles, Bishop Spong appeared on such diverse programs as Politically Incorrect with Bill Maher, The O’Reilly Factor with Bill O’Reilly, Late Night with Tom Snyder, Good Morning America with Charles Gibson, The Oprah Winfrey Show, The Phil Donahue Show and NPR radio with both Diane Rehm and Terry Gross. He was featured on CBS’s Sixty Minutes with Leslie Stahl. He is the author of 26 books, which have sold over 2,000,000 copies. They have been translated into multiple languages. His articles have been published in The New York Times, the Washington Post, The Times of London and others.
He is survived by his wife Christine Mary Spong, who also served as his editor; their five children, Ellen Elizabeth Spong (Augustus Charles Epps, Jr.), Mary Katharine Spong (John Baldwin Catlett, Jr.), Jaquelin Ketner Spong, Brian Yancy Barney (Julieann), and Rachel Elizabeth Carter. M.D. (Scott); and their six grandchildren, Katharine Shelby Catlett, M.D., John Baldwin Catlett, III, John Lanier Hylton, Lydia Ann Hylton, Colin David Barney, and Katherine Barney. 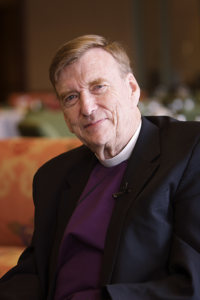