A response to God and Kingdom by Wally Stratford which was a response to Theology and Advocacy by Len Baglow.

Dear Rev Stratford,
Thank you for taking the time to make a detailed response to my article “Theology and Advocacy”. I enjoyed thinking about your approach.

We do I think differ on several important points. However, hopefully this discussion will help us both deepen our understandings.

Firstly, I would question your claim that “The Old Testament has little to say of the kingdom of God.” I agree with John Bright (1953, 7), the Old Testament scholar who wrote nearly 70 years ago, “For the concept of the Kingdom of God involves, in a real sense, the total message of the Bible. Not only does it loom large in the teaching of Jesus; it is to be found, in one form or another, through the length and breadth of the Bible.” A few pages later he comments cogently, “But ideas are ever larger than the words that carry them” (Bright, 1953,11) I think this is particularly true of the words, “The Kingdom of God’.

Secondly, I am not sure that the most relevant text for understanding the Kingdom of God is Lk 17:20/21: “The kingdom of God is not coming with things that can be observed; nor will they say, ‘Look here it is’ or ‘there it is! For in fact the kingdom of God is among you”. While Lk 17:20/21 is an important text, there are around 120 other texts dealing with the Kingdom of God. My position is that we must grapple with all of them. Impossible? Yes, but no less important to do. As one grapples with all the texts, one comes to realise more and more, how Jesus’ teaching subverts, challenges, undermines any Kingdoms/Reigns/Estates/Empires that are based on injustice. 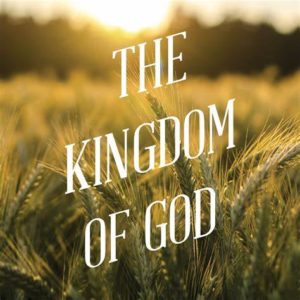 Related to this second point is that overemphasizing Luke 17:20/21 can lead to an over spiritualising of the Kingdom of God, as something within our hearts alone or on another plane (spiritual experience) and not something that has existence in the things we do. I think this is highlighted in your comments on Exodus where the actions of Moses are sidelined.

Thirdly I found it difficult to understand what you meant by “I think that, with the advent of Christianity, presence became absence with God relocated to a heavenly place.” Perhaps it makes some sense to me if you mean by Christianity, the form of Christendom that followed from Constantine and which was forming earlier. However, if you mean that with the coming of Jesus and his message “presence became absence with God” that would make no sense. An important assumption of my article is that Jesus’s proclamation of the Kingdom/Reign/Estate/Empire of God makes possible an even closer relationship with what we might call God in the midst of our present world.

1 thought on “God and Kingdom – further from Len Baglow”