I read Len Baglow’s comments [Theology and Advocacy] with interest. Two words stood up for me – namely God and Kingdom. Gods in a variety of shapes have dominated the life of humankind as far back as is possible to trace.

The beginnings of life for humankind occurred when God stooped down and breathed into the man’s nostrils. All stories require imagination and reading this story I am led to claim that with the breath we find the spirit. Of each other, they are together the one continual activity that begets and maintains constancy in the business of living. (Gen. 2:7)

The Moses story reintroduces the spirit, but in this story, presence is revealed and then affirmed in the words I AM. An element of the verb to be, it reveals an active attendance of the invisible spirit. This is further sealed in the events that lead the Israelites to freedom and stands by them as they enter their desert journey. (Exodus 3)

I think that, with the advent of Christianity, presence became absence with God relocated to a   heavenly place. Creeds, and words of worship and prayer seem to reinforce this notion.

The Old Testament has little to say of the kingdom of God. Oblique references only can be gleaned. Certainly, God is supreme, sacred, the name of God can never be spoken. It appears to me that the essence of the Old Testament is in God’s sacred presence, ample evidence for this is to be found in the Psalms and among the prophets. 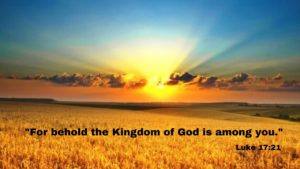 In the New Testament, Kingdom of God appears many times but perhaps Jesus’ comment as reported in Luke’s gospel (Lk 17:20/21): “The kingdom of God is not coming with things that can be observed; nor will they say, ‘Look here it is’ or ‘there it is! For in fact the kingdom of God is among you” is most relevant for understanding. It suggests that the thing being searched for is already present within. The claim of ‘kingdom’ always contains a claim of a monarch reigning, so perhaps it all makes more sense if we connect with the alternative reading which presents Jesus words as “The reign of God is within you”. These words recall the sense of presence powerfully present at the beginning of life, and reiterated in the conversation with Moses as I AM.

The kingdom of God may therefore more sensibly, and with greater meaning, be rendered something like – the presence of God as YHWH-spirit is always with you, riding the wind and contained in the breath that keeps one alive.

It may not be as straightforward, but makes more sense, than “Our Father in heaven – thy will be done on earth as in heaven …”

The first four hundred years of the church were tumultuous, with a host of claims and counterclaims about the shape of the faith. Among these, tradition became most important as a safeguard against heresy. Irenaeus claims that “the original revelation is guaranteed by the unbroken succession of bishops in the great sees going back literally to the apostles. Secondly, an additional safeguard is supplied by the Holy Spirit, for the message was committed to the Church, and the Church is the home of the Spirit.” (Kelly p.37).

Allied to tradition as a demonstration of the truths of the church, an “absolute authority was accorded to scripture as a doctrinal norm … as interpreted by the church, it was the source of Christian teaching.” (Kelly p.42). The scriptures were those of the Jews – our Old Testament.

In those years the church suffered persecution, Christians endured martyrdom with an entrenched belief that their soul was safe. Gnosticism became a force to be reckoned with, eventually becoming muted by the many forcefully argued refutations.

The church, after argument and discussion, conferences of bishops, and theological musings, committed to an after-life, and to a Son of God destined to be a king. It was all cemented into place with the conversion of the emperor Constantine, and his declaration of the truth of the Nicene Creed.

Hailed as a Christian Emperor, Constantine’s “death was received with universal manifestations of grief, and his reign was regarded as continuing after his death: his funeral, conducted after the arrival of his second surviving son Constantius, was a magnificent spectacle,” (Stevenson 396).

“By the middle of the fifth century the Roman church had established, de jure as well as de facto, a position of primacy in the West, and the papal claims to supremacy over all bishops of Christendom had been formulated in precise terms.” (Kelly 417).

Is this, I wonder, the real beginning of the Kingdom of God.