Advocacy, Evangelism and Service to the Community are related concepts in theology. All are about announcing and making present the Kingdom of God. Advocacy is about the prophetic role of proclaiming that even though the Kingdom of God has been announced in Christ, the poor, the exploited and even the earth itself still cry out for the fulfillment of that promise and reality. In Evangelism we put in words our experience of the Kingdom so that others might understand and join in the liberating work of the gospel. In Service we act as exemplars of what is happening as the Kingdom of God becomes real.

The word “Kingdom” sounds strange to modern ears. Scholars at times use other words to translate the Greek. These include Reign,1 Estate,2 and in the case of the scholars of the Jesus Seminar, “Empire”,3

Each of these alternate translations alerts us to the depth and breadth of the reality that
Jesus is proclaiming. It is clear that for Jesus the Kingdom of God is not just an idea but a happening, an event:

Central to this event is a change that is occurring simultaneously at several levels; the individual, the relational, the societal, the cultural and even at the Kingdom or Empire level, which includes all the others. This is perhaps clearest in the first Beatitude which reads, 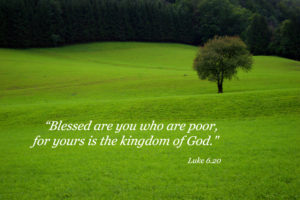 To the ancient ears this is both a scandalous upturning of political and cultural reality, and also a liberating word for those who are poor who suddenly find themselves first in this announced
Kingdom. And yet of course the Kingdom announced is not yet fully formed. Its existence in space and time depends on those who respond to Christ’s call. For the initial small gathering of Jews and associated gentiles this took incredible faith, especially when faced with the massive power and then hostility of the Roman Empire. They responded by building small communities in which they tried to enact the reality of this new Kingdom, and they spread the good news of this new way of living and responding to God.

Today our era is both different from and similar to biblical times. The differences include increases in technology that have led to our computer or information age, significant advances in health care and medicine, and a standard of living for many that is far more luxurious than any Roman emperor could imagine.

Yet many people still live in poverty while others profit from their labour and live in extraordinary luxury; there are wars and rumours of wars, corruption and exploitation.
Empires have come and gone, but empires remain. In ancient times there were the Egyptian,
Assyrian, Babylonian, Persian and Roman empires all juggling at some time for power. Until recently we had the British Empire, and now today we have the American, Chinese and perhaps re-emerging Russian empires. Such human empires have not stopped being exploitative.
Australia as a nation-state (a small kingdom if you will) has had a history of identifying first with the British Empire and more lately with the American. The most obvious example of this is our
participation in wars over the last 130 years. However, it is not just wars but a way of thinking about power, race, and exploitation that we have taken for granted, that is at odds with the Kingdom of God proclaimed in Christ.

This has led to a cultural framework in which people aspire to a material security and comfort for themselves and those like them at the expense of the other. This results in a fear of the other. Our current treatment of refugees and the previous white Australia policy are examples of this framework in practice. The more one is caught up in the empire framework, the harder it is to hear the liberating call of the Kingdom of God. Churches which accept these human empire values uncritically (often unconsciously) lose their ability to identify with or announce God’s Kingdom.

This is not only because of proximity to the Parliament, but because so many church members have experience either working in the public service or as members of political parties or national organizations such as The Australia Institute or Australia 21. The challenge for the Uniting Church in the Canberra region is to seize this opportunity. As inequalities grow in Australia and meanness of spirit stalks our political culture, it is certain that God continues to hear the cry of the poor and witnesses their oppression (Exodus 2: 9). Even though we feel inadequate and ill prepared, we have the ability to advocate on a wide range of issues. Will we
respond to the call to advocacy? “So come, I send you to Pharaoh … to bring my people out of Egypt. … I shall be with you.” (Exodus 2: 10-12)

Len Baglow
Len is a member of the Canberra Region Presbytery Social Justice Group and of Woden Valley Uniting Church and subscriber to the UCFORUM. 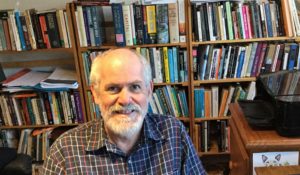 3 thoughts on “Theology and Advocacy, by Len Baglow”