Mapoon community is situated on the traditional lands of the Tjungundji people.  A church mission commenced near Trathalarrakwana (unconfirmed spelling of a Tjungundji word meaning ‘Barramundi story place’) or Cullen Point on 28 November 1891.  Mapoon Mission was established under the name

Batavia River Mission by Moravian missionaries on behalf of the Presbyterian Church of Australia, with Queensland Government financial assistance, on land reserved by the Government under the Crown Lands Act of 1884.   Within a few years the mission became known as Mapoon, a Tjungundji word meaning  ‘place where people fight on the sand-hills’.   Mapoon is also known as Marpuna.  As the influence of the mission widened in the surrounding lands, the reserve was extended south to the Mission River near Weipa.  Some of the traditional owner groups who eventually came to live at Mapoon included the Mpakwithi, Taepithiggi, Thaynhakwith, Warrangku, Wimarangga and Yupungathi people.

The story of the closure of Mapoon in 1964 meshes into the sad history of resettlement that was occurring widely. By 1984 traditional owners were coming back. I (Paul Inglis) visited Mapoon in 1985 while doing research for Comalco in Weipa and saw where the settlement had been destroyed and the beginning of rebuilding.

Barbabra Miller tells the story beautifully. Thanks Noel Preston for sending the details.

White Woman, Black Heart recites, with powerful eloquence, an amazing story: the personal journey of the author and the heroic resilience of the Mapoon Aboriginal Community from the Western Cape. The author, Barbara Miller, has lived in Cairns for more than four de 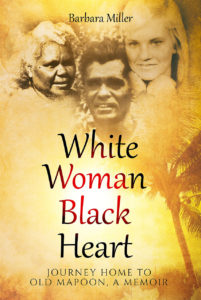 cades. I (Noel Preston) first met her soon after she published the story of the Aboriginal people ejected from the Mapoon settlement on Cape York in the late 1960s. This community had been conducted by the Presbyterian church in conjunction with the State government. The devastating impact on these indigenous Australians was an injustice inherited by the Uniting Church. Miller’s account weaves her own story with that of the Mapoon people (some of whom have now returned to their original land). Miller continued her advocacy for First Australians in various roles in the north such as being part of the original founding team of the North Queensland Land Council with her first husband, Mick Miller, and in the 1990s as CEO of the Aboriginal Coordinating Council which represented Aboriginal local government councils.

This enthralling personal memoir, with its incredibly detailed recollections, extends from the turbulent times of the sixties and seventies to the present which she shares with husband Norman in pastoral ministry. White Woman, Black Heart is also an inspiring testimony to the empowering convergence between her authentic spirituality and her never-ending struggle for social justice. As a contribution to the history of that political struggle in Queensland and the Western Cape particularly, it is important for scholars, activists and all who are committed to supporting the First Australians find their rightful place in Australian society.