Making sense of the Christmas stories. by John Queripel. John is a UCA minister  with a diverse set of experiences … city, rural, university and prison ministries. John is committed to scholarship and authenticity in faith. 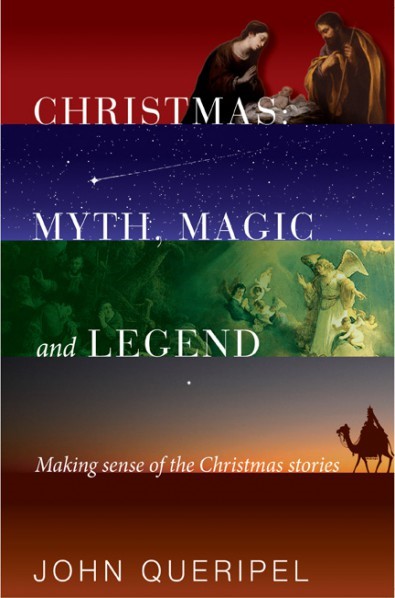 A myth is not a lie. With that introduction, John Queripel captured my interest and held it to his last words. And his last words are good to read…We are not to pretend that the stories are history but rather to enter the experience and be transformed by them. I can think of no better way to be transformed than to use this book as a guide..John’s forensic skills have produced a classic critical analysis of the Christmas narratives, unpacking the true meaning of Christmas, and bringing into focus the powerful symbolic and metaphorical teaching. At the same time he has dismantled the a huge amount of overly simplistic thinking by sourcing the forces that have shaped and politicized the gospel writers.John helps us to see past our Western scientific mindset, profoundly shaped by Aristotelian logic of factual, objective and verifiable truth.

Most affected by the populist scientific framework is the literalist reader of Scripture.  Richard Dawkins is also influenced by the same logic!

But truth lies in  myth….

The Christmas Story is simply not factual but possesses deep truth in another way. Not to realize this means missing out on greater understanding of the purpose of biblical stories such as that of Adam and Eve.

Literal reading produces an ideological outcome serving self interest, eg of woman being born of man! Many biblical myths have had tthe power of ensuring men’s dominance over women and human dominance over the rest of creation. John carries out some of the best theological research to illustrate the development of the birth and crucifixion legends and myths. He makes it easy to see why it is foolish to take the stories literally and the consequent dumbing down of Jesus human role and purpose.

He has much to say about the way in which we have blended in the ttwo different biblical stories of Matthew and Luke. In his wonderfully attention grabbing writing style, he opens up to analysis many of the taken for granted assumptions about the world of Jesus. He shows how important is an understanding of the radical changes taking place in Judea at the time of the gospel writings.  This includes Challenging traditional views about pharisees, the Jesus Jews and the rabbinic Jews and their differences from the sacred traditions.It is important to understand the ‘anti Jewish agenda of Matthew.

I found his expose of the different infancy narratives of Matthew and Luke and finding their common ground and emphases ffascinating as well as informative. Each gospel writer has a different agenda. Knowing about these agendas is part of the exploration of honest theology.

Having dismantled the notion of Jesus being born of a virgin, the doctrine of perpetual virginity of Mary, and the Christian aversion to sex, the doctrine of immaculate conception is left with nothing to support it. Since the latter was only established in 1854 it is not hard to rrealize that the Church has played a major role in distracting us from the valuable mythological values.

After reading his comments about the jjourney to Bethlehem on foot over ten days while heavily pregnant and only so Joseph could be included in the census of males it is not hard to accept that the narrative has another purpose of fulfilling ancient prophecies about where the Messiah will emerge.