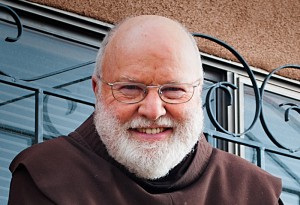 The first book of the Bible, Genesis, is not the Bible’s oldest book. Genesis’ two accounts of creation were compiled in their present form as late as 500 BC. During this period, the Jews were likely in exile in Babylon, where they were exposed to multiple creation stories.
Two excellent teacher friends of mine, Walter Wink (1935-2012) and Rob Bell (b. 1970), both describe one of the most popular stories of that time, the Babylonian Enuma Elish. It describes creation happening after a battle between two gods. The male god kills the female god, then tears her body apart and uses half of her to create the heavens and half to create the earth.
Both teachers point out that the driving engine of this story is violence, carnage, and destruction. So, the exiled Jews decided to write down their own oral tradition, surely to stay cohesive as a tribe among all the competing influences from Babylonians and others. In the Judeo-Christian story of Genesis 1, God—who is “Creator” in verse 1, “Spirit” in verse 2, and “Word” in verse 3 (foretastes of what we would eventually call Trinity)—creates from an overflowing abundance of love, joy, and creativity. Humanity’s core question about our origins is whether the engine of creation is violence and destruction or overflowing love, joy, and creativity. Is our starting point love and abundance or is it fear and hatred? How we begin is invariably how we end and how we proceed. Our creation story is important.
The Judeo-Christian creation story says that we were created in the very “image and likeness” of God (Genesis 1:26) out of generative love. The focus is original blessing instead of original sin (which comes two chapters later, in Genesis 3). We are first sent out with cosmic hope rather than a big problem that must be solved. The Holy Spirit holds this divine image within every created thing, and becomes its “soul.” It drives us toward “life, and life more abundantly” (John 10:10). When we start in a positive way instead of with a problem, there is a much greater chance we will remain positive as we move forward. Even the business world today knows that a vision statement must precede and inform the mission statement. As Matthew Fox taught many years ago, Christianity’s contrived “Fall-Redemption” spirituality [1] just keeps digging us into a deeper and deeper hole (my words!). We must return to our original “Creation Spirituality” for the foundational reform of Christianity.