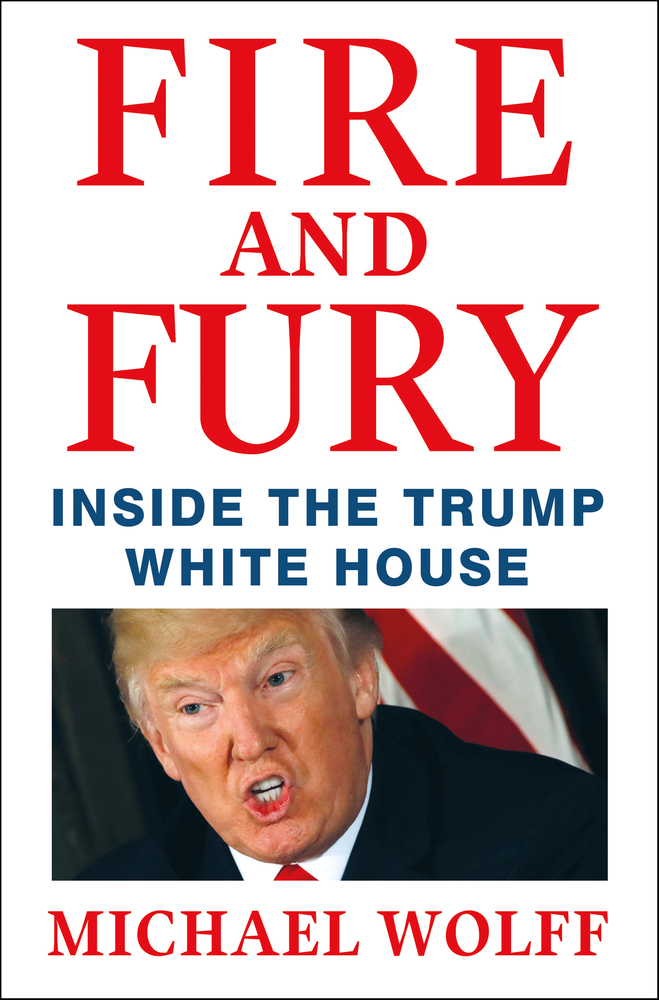 Certainly a great read…well written and enthralling …. especially for US citizens who would know all the characters! My reading of Fire and Fury: inside the Trump Whitehouse by Michael Wolff was biased by my personal dislike for Trump and all he stands for and so I enjoyed it immensely. What does that say about me?

The final word of Wolff is:

Trump, in Bannon’s view, was a chapter, or even a detour, in the Trump revolution, which had always been about weaknesses in the two major parties. The Trump presidency—however long it lasted—had created the opening that would provide the true outsiders their opportunity. Trump was just the beginning.

If this is just the beginning, what is the world in for? How do ordinary people deal with the current crisis of leadership in the world’s major economic and military power? Or is there no crisis?

The bewilderingly repetitive description of most of Trumps closely aligned campaigners and political leaders as less than really impressed by Trump and often privately very critical of his actions and words, demonstrates the amount of political power games were at play in his election. Trump moved rapidly from a ‘no chance’ in early 2016 to ‘ a likely winner’ by the end of the campaign towards the end of 2016. Much of this can be attributed to alliances and back room deals with media. There were some fateful incidents along the way:

On May 12 (2016), Roger Ailes was scheduled to return to New York from Palm Beach to meet with Peter Thiel, an early and lonely Trump supporter in Silicon Valley who had become increasingly astonished by Trump’s unpredictability. Ailes and Thiel, both worried that Trump could bring Trumpism down, were set to discuss the funding and launch of a new cable news network. Thiel would pay for it and Ailes would bring O’Reilly, Hannity, himself, and maybe Bannon to it.

But two days before the meeting, Ailes fell in his bathroom and hit his head. Before slipping into a coma, he told his wife not to reschedule the meeting with Thiel. A week later, Ailes, that singular figure in the march from Nixon’s silent majority to Reagan’s Democrats to Trump’s passionate base, was dead.

Trump’s failure to offer condolences to Aile’s wife, Beth, was typical of many undiplomatic slips and the funeral with only close Aile’s allies present showed the way in which the Republican Party was imploding and now needed trump to survive.

The president had surely become the right wing’s meal ticket. He was the ultimate antiliberal: an authoritarian who was the living embodiment of resistance to authority. He was the exuberant inverse of everything the right wing found patronizing and gullible and sanctimonious about the left. And yet, obviously, Trump was Trump—careless, capricious, disloyal, far beyond any sort of control. Nobody knew that as well as the people who knew him best.

The Trump campaign was a giant exercise in bluff and bravado. He rationalised that he was a gift to the USA and the world, that he was one win away from turning the US problems, and inevitably those of the rest of the world, around.

But it is not just the story of the election campaign that enthrals. It is the events that have followed too.

Global liberal leadership had been all but paralyzed by the election of Donald Trump—indeed, by the very existence of Donald Trump. But it was an inverted universe in the Middle East. The Obama truculence and hyperrationalization and micromanaging, preceded by the Bush moral militarism and ensuing disruptions, preceded by Clinton deal making, quid pro quo, and backstabbing, had opened the way for Trump’s version of realpolitik. He had no patience with the our-hands-are-tied ennui of the post-cold war order, that sense of the chess board locked in place, of incremental movement being the best-case scenario—the alternative being only war. His was a much simpler view: Who’s got the power? Give me his number.

Trump has worked on the principle that the ‘enemy of the enemy is my friend’. Consequently in its simplest form his notion that Iran was the bad guy in the Middle East brought him into unquestioning support for Iran’s enemies. His lack of foreign power knowledge of relationships will be his downfall. This approach has given Russia an enormous amount of freedom in Eurasia and who knows where this will go.

We are going to see a lot of ‘prosecuting’ in the months ahead and all of this will only add to the hype around Trump and help books like this to sell. We must not forget that a key player in all the events around Trump has been Murdoch, at first opposed but later a friend and advisor. With friends like that, and advice from that quarter, we can expect trump to have plenty of wins in his attack on former friends.

This is a book that must be a significant artefact in the collection of Trump critiques. But the best book is yet to be written … after Trump slips into history.