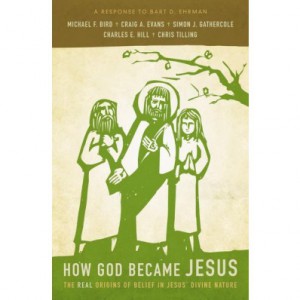 Thanks to a subscriber for drawing our attention to a work that responded to Bart Ehrman’s How Jesus became God.  The later publication is:

The publisher’s blurb to the latter book includes: “While subjecting his (Erhman’s) claims to critical scrutiny, they offer a better, historically informed account of why the Galilean preacher from Nazareth came to be hailed as “the Lord Jesus Christ.” Namely, they contend, the exalted place of Jesus in belief and worship is clearly evident in the earliest Christian sources, shortly following his death, and was not simply the invention of the church centuries later.”

The reviews of the Bird et al text have also attracted mixed criticisms and compliments generally based on the theological perspective of the reviewers. Some reviews even find strengths and faults in both books. So our many subscribers can make up their own minds, a number of these reviews are listed here:

How God Became Jesus: Part 1 In Review of the Evangelical Response to Ehrman by JR Daniel Kirk

How Jesus Became God—or How God Became Jesus? A Review of Bart Ehrman’s New Book and a Concurrent Response by Rob Bowman

Response to the response: How God became Jesus by Bart D Ehrman (The comments following this are also interesting).